£661,500 funding boost to tackle serious violence in Avon and Somerset 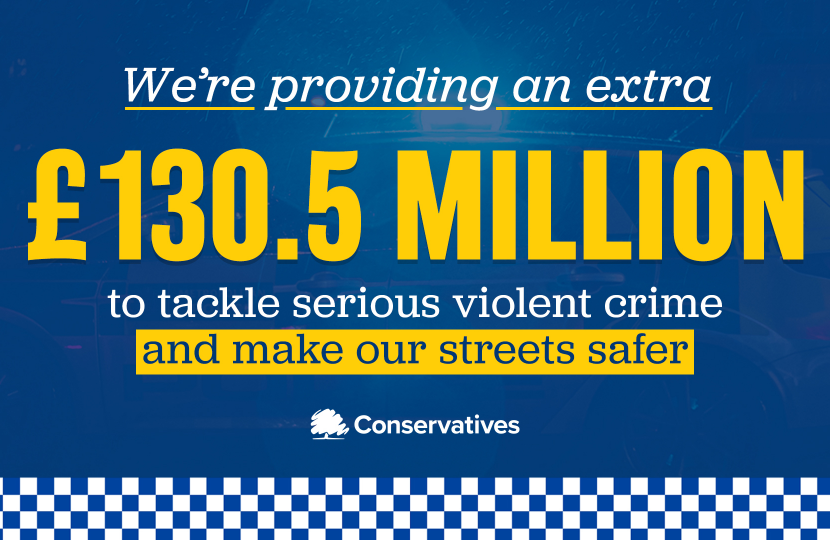 Filton and Bradley Stoke MP Jack Lopresti has welcomed the announcement that the Conservative Government is making available over £130 million to tackle serious violent crime – including murder and knife crime – in the coming year.

Avon and Somerset will receive £661,500 of part of this extra funding, as one of the 18 areas across England and Wales selected for targeted police action.

The total £130.5 million funding package includes £30 million to support the police to take targeted action in parts of England and Wales most affected by serious violence, as well as up to £23 million for a new early intervention programme that will help stop young people from being drawn into the cycle of violence.

In addition to this funding, today’s announcement also provides: £10 million to expand domestic abuse perpetrator programmes – working with offenders to help them change and prevent abuse happening in the first place, over £3 million to expand investigations into gang related material on social media, £1.6 million towards piloting the Creating Opportunities Forum which helps provide access to employment opportunities for young people at risk of serious violence, and £1 million to set up and pilot new homicide reviews – helping to prevent future deaths.

The funding package comes ahead of the introduction of a major criminal justice Bill, which will give police new stop and search powers to tackle known knife and weapons carriers, place a duty on public sector bodies – including police, education and health agencies – to take a joined-up approach to addressing serious violence, and require local agencies to review the circumstances when a homicide takes place involving offensive weapons, such as knives.

This funding builds on the unprecedented work that this government is doing to tackle serious violence in our communities. With £105 million already invested in Violence Reduction Units – supporting over 100,000 young people, increasing police recruitment and our work to get dangerous weapons off the streets via Serious Violence Reduction Orders, we are delivering on our promise to keep the public safe by making our communities safer for the British public.

I am delighted that Avon and Somerset will receive an extra £661,500 to tackle the violent crime that has been robbing too many young people of their futures.

This funding ensures our police have all of the tools and resources they need to tackle violent crime and address its underlying causes in our community, whilst also funding vital early intervention programmes that do positive preventative work with children and young people.

By backing our police with the funding, powers and resources they need, we are keeping the public and our communities safe, so that people everywhere can live their lives free from the fear of crime.

I am determined to cut crime and make our streets safer, which is why we are recruiting 20,000 more police officers, introducing new stop and search powers and giving the police the resources they need to go after the serious violent criminals causing misery in communities.

But when it comes to gangs and serious violence, we must also tackle underlying causes. That is why we are investing in a new early intervention programme to stop young people committing these crimes in the first place.

South Gloucestershire will receive £255,356 to help local high streets reopen and attract shoppers and tourists.
Conservative Government investing a total of £56 million through the Welcome Back Fund to help councils prepare for the end of lockdown when it is safe to do so.