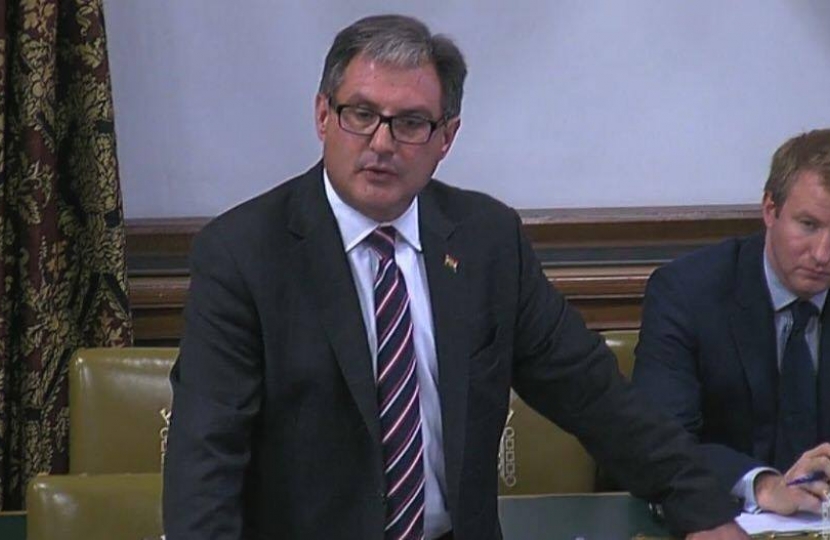 Yesterday Jack had the honour of opening a Westminster Hall debate on Kurdistan. He was humbled by the support the debate received from colleagues, as he feels that the situation in the region had changed dramatically since it was last debated by MPs in 2014. Furthermore, as the independence referendum in September draws ever closer he believes it is of the utmost importance for us to help our Kurdish allies to achieve the outcome of this vote.

Please find below the text from Jack's speech:

Thank you Mr Davies it is a pleasure to serve under your Chairmanship. I would like to begin by declaring an interest. I travelled to Kurdistan in November as the guest of Kurdistan Regional Government and I am Chair of the All Party Parliamentary Group for the Kurdistan Region in Iraq.

It is three years since the last debate here on the Kurdistan Region and everything has fundamentally changed in that time.

The Minister, the Rt Hon Member for North East Bedfordshire, earned much respect in his first stint as the Middle East Minister and his wisdom, experience and expertise, not least with the Kurds, are major assets in his second.

I have visited Kurdistan twice with the APPG. The APPG has done much in its now ten years of service to improve and increase understanding of Kurdistani issues.

I use the term Kurdistani because Kurdistan contains non-Kurds as well. I only refer to the Kurdistan Region in Iraq.

I start by testing key points and end with the measures I believe require our Government's action.

My basic points are:

Iraqi federalism has sadly failed and cannot be revived because the Shia majority has no appetite for federalism or minority rights. The Kurds voluntarily rejoined Iraq in 2003 on Western and Iraqi promises that Iraq would be federal and democratic. This exercise of their right to self-determination did not expire on its first use. They cannot be forced into subordination by leaders in Baghdad.Iraq has in practice severed itself from Kurdistan, pays no budget contributions and does not help Arabs sheltering there, but recent co-operation between their separate militaries have been very successful indeed. The Kurds have rejected UDI and wisely seek a reset of relations with Iraq, which could be stronger without constant internal disputes between Baghdad and Erbil. Sectarianism and centralisation caused the rise of Daesh and could do so again. A yes vote in September's independence referendum in the Kurdistan region will lead to negotiations and the West should help, not least over the disputed territories. In any case, the West should continue to nurture relations with the Kurds as a beacon of moderation, pluralism and a supporter of Western values.

The Kurds in the Kurdish Iraqi region then suffered second class citizenship, and then in the late 1980's genocide at the hands of Saddam Hussein - a genocide that was formally recognised by the Commons in 2013.

Sir John Major's no-fly zone and safe haven from 1991 protected the Iraqi Kurds from further attack by Bagdad. Tony Blair and George Bush's overthrow of Saddam Hussein was welcomed by the Kurds as a liberation. Indeed I personally on visits to the region, have been thanked for the British contribution in the liberation of Iraq.

The Kurds rejoined Iraq in 2003 and tried to make it work. They brokered a federal constitution agreed by 80% in the Iraqi referendum in 2005. It enshrined a binational country of equals and, for instance, agreed a mechanism for resolving the status of the disputed territories. The deadline for that was 2007 but was not carried out.

The end to federalism was demonstrated in February 2014 by Iraqi Prime Minister Maliki who unconstitutionally cut all federal budget transfers to Kurdistan. In June 2014 Daesh captured Mosul, took a third of the country and seized sophisticated American military kit. A Kurdistani offer to help before the attack was spurned. Maliki failed the most vital duty of any leader which is to uphold the security of the State and protect its people.

The Kurds suddenly acquired a 650 mile border with Daesh and an overnight influx of Iraqi Arabs from Mosul who added a third to the population, straining all public services to breaking point. Daesh attacked Kurdistan in August 2014 and came within 20 miles of the capital, Erbil, which was only saved by immediate American airstrikes and assistance.

The Kurds faced a perfect storm of crises and came through, not unscathed but in one piece. This highlights their great resilience.

The story of how they eventually united with the Iraqi Army against Daesh is instructive. When I visited the Kirkuk frontline in November 2015 I was told there was no co-ordination or indeed any communication between the Peshmerga and the Iraqi Army. A year later, with Western support, they concluded a deal to drive Daesh out of Mosul, which I saw for myself on the road to and in Mosul last November. This unprecedented military partnership came despite the historic bad blood between the Kurds and the Iraqi's which exist in a large part because of the Iraqi army's chemical weapons attacks on hundreds of villages and the extermination of nearly 200,000 people in the 1980s.

I will not focus on moral reasons for airing arguments for independence but address strategic gains for the West. The key question, once Daesh is defeated in Mosul and later in Raqqa, is how to prevent any such force re-emerging and how to undermine the ideological and political appeal of such 'vile fascism,' as the KRG High Representative to the UK, Karwan Jamal Tahir put it.

We have to understand why many Sunnis came to believe that Daesh was less worse than Baghdad. Many couldn't accept the loss of their privileges under Sadam. Yet thanks to the Kurds, Sunnis joined power-sharing governments in Baghdad. Their militias and tribes helped defeat the Al Qaeda insurgency in 2007/8.

The immediate consequence of the disastrous American decision to withdraw all its forces - favoured by Maliki - was that he brutally repressed Sunni civil rights protests. Sunnis drew lessons from how badly Shia politicians treated the Kurds and concluded they would face worse.

The central task now is to eradicate the drivers of Sunni radicalisation and protect minorities who suffered rape, murder and dispossession by Sunni neighbours. As well as the massive cost of reconstruction and the need for a Marshall plan of the mind to tackle the deep traumas of those who were raped in their thousands and saw their men folk slaughtered, they need devolved governance.

Already, we see that the old centralising is in contention. It would be odd if the status of Kurdistan were not part of the discussion after Daesh.

But those who say it is the wrong time cite internal division in Kurdistan, the starkest symbol of which is the paralysis of its parliament. I hope that continuing negotiations, which have involved our diplomats, will resolve the dispute. As candid friends we must continue to put pressure on the Kurds so their Parliament sits again as soon as possible.

The state of the economy is another reason some people say now is the wrong time. But I take the point made by the Kurdistani leader and former Iraqi foreign minister Hoshyar Zebari that 'if we wait for all the problems to be resolved we will have to wait forever.'

I commend Prime Minister Barzani and Deputy Prime Minister Talabani's reforms: aligning revenues with state spending, and introducing better forms of identification of the work force to eliminate double-jobbing and ghost workers. They have much further to go but statehood could end excuses for neglecting reform and allow access to development funds conditional on that reform.

The Kurds reckon old foes are weaker or amenable to a potential independence agreed with Baghdad. Turkey, Kurdistan's major trading partner, could see Kurdistan as a major source of secure energy supplies, an interlocutor with the Kurds in Turkey, and a buffer between Turkey, Sunnis and Shias. Iran is resolutely opposed but is under intense pressure from America and the Gulf States and has no right to veto Kurdistani independence. Arab Iraqis adore Kurdistan as "Shimal Habib" or Beloved North thanks to their holidays there. But Baghdad has refused at all to treat the Kurdish region fairly or with any good will.

As for the bilateral relationship, the Kurds see us as a partner of choice and the APPG supports a bigger British footprint in Kurdistan. I have three specific issues.

The Peshmerga. The Gallant, brave and wonderful Peshmerga who are fighting Daesh on the ground which helps secure our own security, freedoms and our way of life. One of my most moving visits was to see wounded Peshmerga soldiers in Erbil. Many seriously injured soldiers are beyond the capacity of the health system there and I urged the British government to supply a small number of beds at the Queen Elizabeth Hospital in Birmingham because we owe the Peshmerga a huge debt of honour and gratitude. I ask the Minister will this request be accepted.

Visas. The visa application system is a very vexed issue. The rejection rate has increased from 55-66%. We need up to date figures and I ask the minister to help with this. Entry Clearance Officers have maybe three minutes to examine applications and any small query means no. One application was rejected due to a small discrepancy over claimed income - exchange rates had moved in the intervening days. Such issues are not clarified because we longer interview and nor can our diplomats or ministers intervene to assert a national interest. We, of course, should police and secure our borders but we must in a post Brexit world encourage and not make it excessively difficult for people who want to do business here.

Bilateral relations. In May 2014, the KRG Prime Minister visited the UK and we established a joint committee which was overtaken by events. May I ask when the committee will begin and urge the government to invite the Prime Minister or new President to meet our Prime Minister?

So to conclude; today's debate coincides with Independence Day in the United States. The Kurdish people will decide in September in their referendum whether they also want to be an Independent State. We can be optimistic and helpful in whatever discussions and negotiations follow on from the referendum.

But whatever the people decide, the UK and the KRG have a lot in common and our special relationship must be nurtured and developed.