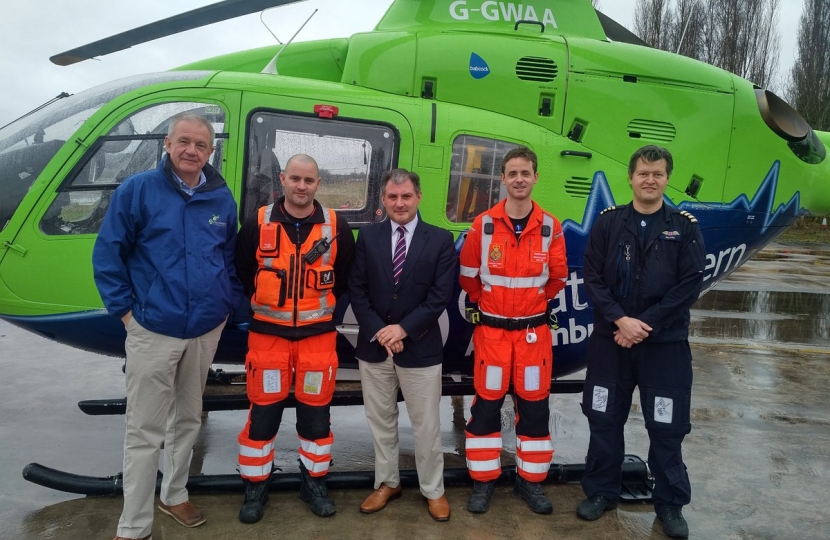 Jack Lopresti MP today visited Great Western Air Ambulance Charity to discuss the progress they have made since being awarded £1 million of Libor fines money in the Government's Autumn Statement. Jack supported the charity in their efforts to obtain the money, which was required to support their ongoing running costs.

GWAAC are able to work to the Gold Standard Critical Care Model, which means they can get Critical Care Paramedics and Critical Care Doctors to the scene of an incident. They arrive no more than 20 minutes later, anywhere in the region. Their average flight time is just 12 minutes. From pre-hospital blood transfusions to roadside amputations or treating cardiac arrests, it's the skill and dedication of GWAAC's team that means one patient in five – a patient otherwise expected to die – survives. In 2015 the Critical Care Team attended 1,655 jobs, by helicopter and critical care car. Of these 285 were in South Gloucestershire.

Jack discussed the stability that the money has made to the charities work, and about their plans for the future. They still need to raise £2.3 million a year to keep their helicopter flying.

'I was delighted that the Government awarded £1 million of Libor money to the Great Western Air Ambulance Charity, money that was a great help in meeting their commitments,' commented Jack. 'It is a tribute to the hard work the charities staff put in to the bid that they were awarded this money, and I know that the Air Ambulance will be able to carry on its excellent work as a direct result of the award.'