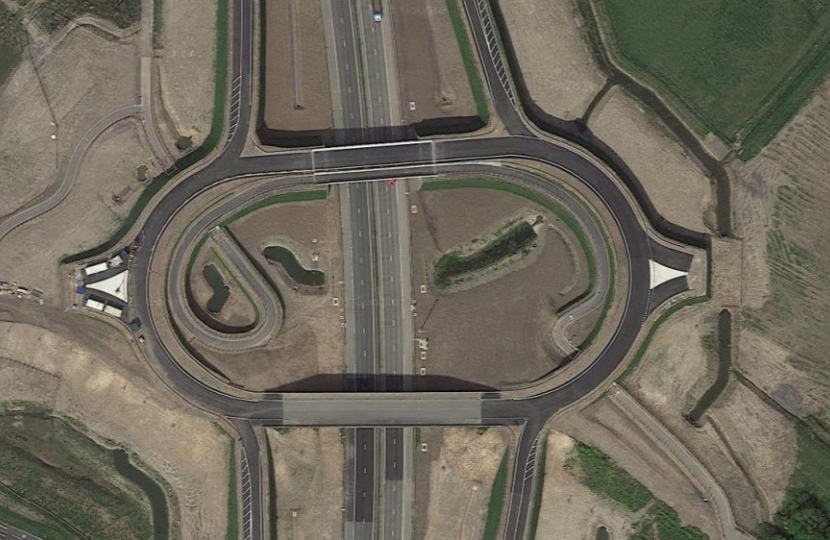 Filton and Bradley Stoke MP Jack Lopresti has been leading the campaign to get work moving on the unfinished M49 junction at Severnside. The junction, funded by £50 million of taxpayers’ money, remains unconnected to the local road network more than a year after construction on the junction was finished by Highways England.

The vital new piece of infrastructure will support thousands of new jobs in the Severnside development and will divert HGV traffic from surrounding communities including Easter Compton, Severn Beach and Pilning. However, since construction of the main junction was complete, the project has been stuck in administrative disputes between the developer, Severnside Distribution Land Limited, South Gloucestershire Council and Highways England over construction of additional roads to link the junction to the development site and the wider road network.

To try and get things moving, Jack has been working with the Mayor of the West of England, Tim Bowles, over several months. In November 2020, Jack secured a meeting with Transport Secretary Grant Shapps to ask for his support in pressing the developer for action. He also raised the issue in a debate in the House of Commons in December 2020.

Mr Shapps wrote to SDLL in December and stressed the importance of work being completed as soon as possible. The developer responded in January, suggesting that the fault for the delay lies with Highways England in South Gloucestershire Council. Jack then wrote to the Chief Executives of Highways England and South Gloucestershire Council to ask for direct responses to the claims by the developer. He is waiting for responses to these enquiries.

I was grateful to the Transport Secretary for getting involved in this situation and pushing the developers to get things moving and get this junction connected. It’s astonishing that £50 million of public investment is sat unused because of disagreements between the developers, Highways England and South Gloucestershire Council.

I hope that all parties address why this project went ahead without necessary legal undertakings mandating the construction of roads linking the junction to the wider network, so this situation isn’t repeated in future. The completion of this junction is vital to the local economy, unlocking thousands of jobs as we build back better from the coronavirus pandemic.

This junction is a major new piece of national infrastructure, and represents everything that this Government is delivering on; investment in sustainable jobs, improving the environment by taking heavy traffic out of our local communities and onto motorways and supporting our new freeports as we look to the world with our fantastic new trade deals.