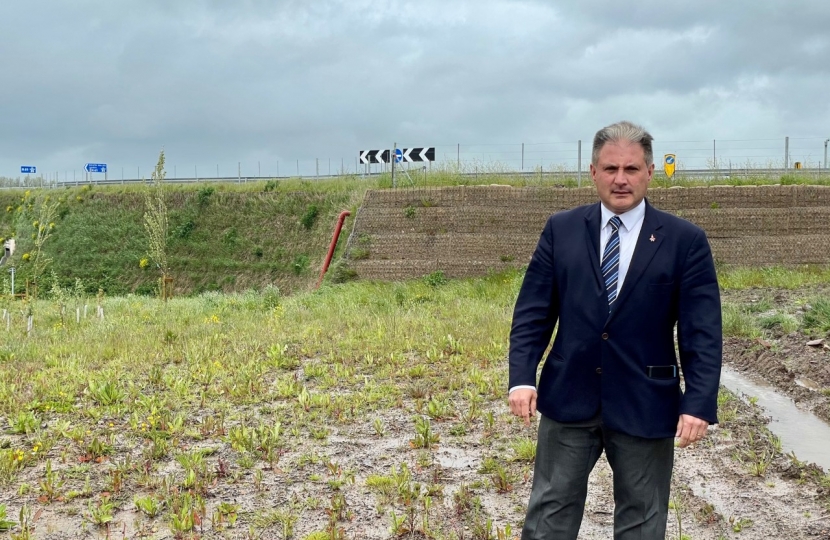 The junction was completed by Highways England in 2019, however due to failings in the historic planning permission for the distribution site, there was no legal obligation for the developer to construct roads linking the junction to Severnside. The junction has been stuck in limbo for months, despite all sides writing to Jack at the start of the year showing their willingness to complete the work but throwing up contradictory issues.

Jack had already discussed the junction with the Secretary of State for Transport, Grant Shapps, who said in December:

I am fully supportive of Jack’s ambitions to see this scheme completed.

I am deeply disappointed that there is still no evidence of any further action being taken to start construction of the link roads [to the junction].

This junction was funded by £50 million of taxpayers’ money and will support tens of thousands of jobs. It will save local communities currently choked by heavy goods vehicles and power our region’s recovery from the pandemic. It is shameful that we are in the position we find ourselves in due to incompetence, intransigence or worse. I am determined that this will be resolved, and the link road will be built very soon.”

He has asked for substantive answers on issues relating to the construction of the road stubs to the boundary of the Highways England site, the timeline for completion of the work, arrangements with surrounding landowners, excess fill on the site and planning permission.

It’s astonishing that another six months have passed and still we seem to be no closer to this junction being connected to the road network.

I’m very disappointed and concerned that everyone involved keeps passing the buck. It’s time for all sides to get a grip and get this junction finished, so local residents can be saved from the disruption of trucks travelling on unsuitable roads and disturbing our communities, and we can secure vital new jobs and benefits to the local economy.

I’ll be talking to the Minister for Roads, Baroness Vere, on Monday to see how the Government can push for more action, and will work to ensure nowhere else in the country can be stuck in this same situation.

The full text of the letter is as follows:

I am writing following my previous exchange of letters with each of you in January and February of this year when I raised my serious concerns about the lack of progress to link the completed M49 Junction at Severnside to the local road network. While I was cautiously reassured by your responses at the time, I am deeply disappointed that there is still no evidence of any further action being taken to start construction of the link roads.

I visited the site in May, and was incredibly concerned to see wooden pallets, security fencing and barriers strewn about the place, leaving it incredibly unkempt and suggesting a lack of care on the part of the developers for the potential visual impact for people visiting the area – an especially pressing concern given the opening of the new Travelodge right next to the site, and the presence of several major international businesses.

I would appreciate an update on the following substantial points, to put on record what action is being taken to ensure completion of this vital link as soon as practicably possible.

Construction to the boundary of the Highways England site
In his email, Michael Shebson stated that SDLL “made HE aware that it had not constructed the new junction to the correct legal boundary”. However, Peter Mumford states in his response to me that this is standard practice and that the plans were shared with SDLL in February 2018, meaning SDLL were aware of this before the fact.

Can Michael Shebson please confirm exactly when SDLL were made aware that the construction of the stub roads would stop before the boundary of the site? As Peter states in his letter to me, the developer on the other side of the junction has expressed no similar concerns and is pressing ahead with designs for their link road. Therefore, I fail to understand why this process is not being followed by SDLL and can Mr Shebson also confirm that SDLL will undertake to complete the link up to the stub roads?

Timeline
SDLL have stated that they expect construction to take 38 weeks. I would appreciate clarity on when all parties believe the work to build the link road, connect it to the local network and have the roads on the Severnside site adopted into the local network will begin, and when they anticipate it be completed.

Excess fill
Mr Mumford has strongly denied claims by Michael Shebson that excess fill has been left on SDLL land. Can both parties please confirm that this issue has been resolved and, if not, can Mr Shebson please provide evidence of this fill?

Planning permission
It is undeniable that there were serious flaws in the initial development and granting of planning permission of this project, meaning nobody was legally required to build the link roads to the junction when planning was approved. Can Mr Perry please tell me what steps the Council have taken to ensure this sort of thing cannot happen again in South Gloucestershire? I will also be raising this with Ministers, so no other area might be subjected to a similar situation that the area I represent has faced.

This junction was funded by £50 million of taxpayers’ money and will support tens of thousands of jobs. It will save local communities currently choked by heavy goods vehicles and power our region’s recovery from the pandemic. It is shameful that we are in the position we find ourselves in due to incompetence, intransigence or worse. I am determined that this will be resolved, and the link road will be built very soon.

I will be putting this letter in the public domain and I look forward to your responses.

Filton and Bradley Stoke MP Jack Lopresti today spoke in a debate in Westminster Hall commemorating 10 years since the BBC Panorama documentary that exposed horrific abuse of patients with learning disabilities and autism in the Winterbourne View hospital.