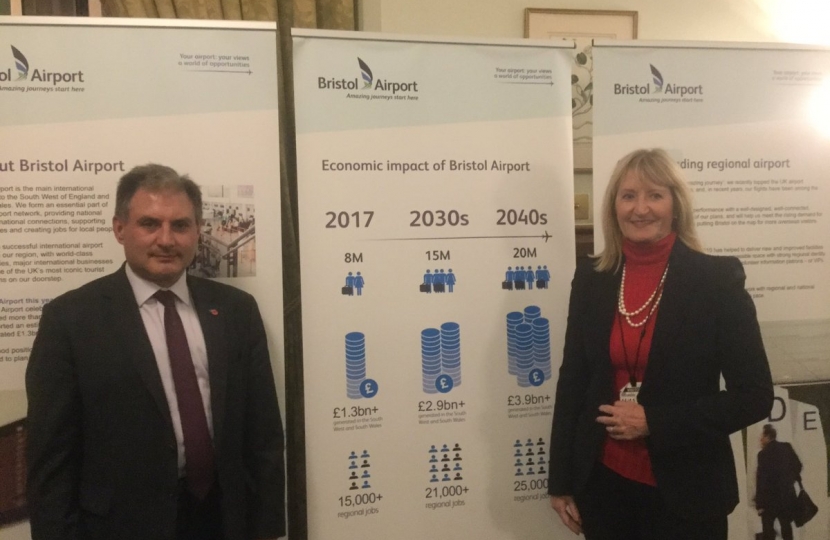 This week I met Janis Kong from Bristol Airport to discuss their exciting plans to expand capacity and deliver more jobs and investment for our region.

Bristol Airport is the main international gateway to the South West of England and it forms an essential part of the transport network, providing national and international connections for holidaymakers and businesses. This year the airport celebrated its 60th birthday and a major landmark by handling eight million passengers for the first time but investment is now needed as over the next few decades the airport has projected that capacity could rise to twenty million passengers per year.

One of the main topics of discussion was improving access to the airport for passengers travelling from the north of Bristol as currently Bristol Airport is the largest airport in the UK without direct access by dual carriageway, motorway or rail. I was assured that part of the airport’s ambitions for the future includes strengthening the region’s case for new transport infrastructure to ensure that any growth in passenger numbers are sustainable.

Last month I joined colleagues in writing to the Chancellor ahead of the budget to call for a cut in Air Passenger. Britain currently has the highest tax in Europe and one of the highest globally, but as we leave the European Union we need to be as competitive as possible and by making ourselves as open as possible to the world via the air is an important part of this. I believe that cutting Air Passenger Duty is essential to Bristol Airport’s ambitions to increase passenger numbers and I hope that the Government will support our regional airports as they look to increase jobs and grow the local economy.